The Lightship Sailors Association was recently contacted by the new owner of Frying Pan Shoals Light Tower ( not the Lightship ). He would like to make contact with any of the Coast Guard Crew that served on the TOWER. Please contact Larry Ryan for contact information. He went on to say we would be receiving an invitation in the spring of 2011 to take a tour of the Frying Pan Shoals Tower. Please help us if you served or know of someone that served on the tower.

The Frying Pan Tower is a Texas Tower 46 miles south of Masonboro Inlet. The light tower marks the shallows around Frying Pan Shoals. It replaced a light ship in 1966 and was manned until 1979 when it became automated. Now it's 4 massive legs act as a waypoint for bluewater fish like tuna, king mackeral, and dolphin while the bottom is home to dozens of species of tropical fish, many of which there is no record of them being this far north.

The Tower is one of the best dives off the North Carolina coast. The shallow depth (50ft) coupled with the abundent marine life make it an incredible dive. Currents can get pretty bad but most of the time they are managable. It is a popular spearfishing and lobstering location. The Tower is not the only place to dive in the area. Ledges run for miles all around the area and provide for a great second dive. Unfortunatly the Tower is going to be torn down because it is to far gone to be restored. The word is it will be sunk just offshore in deeper water and may provide a good dive site. 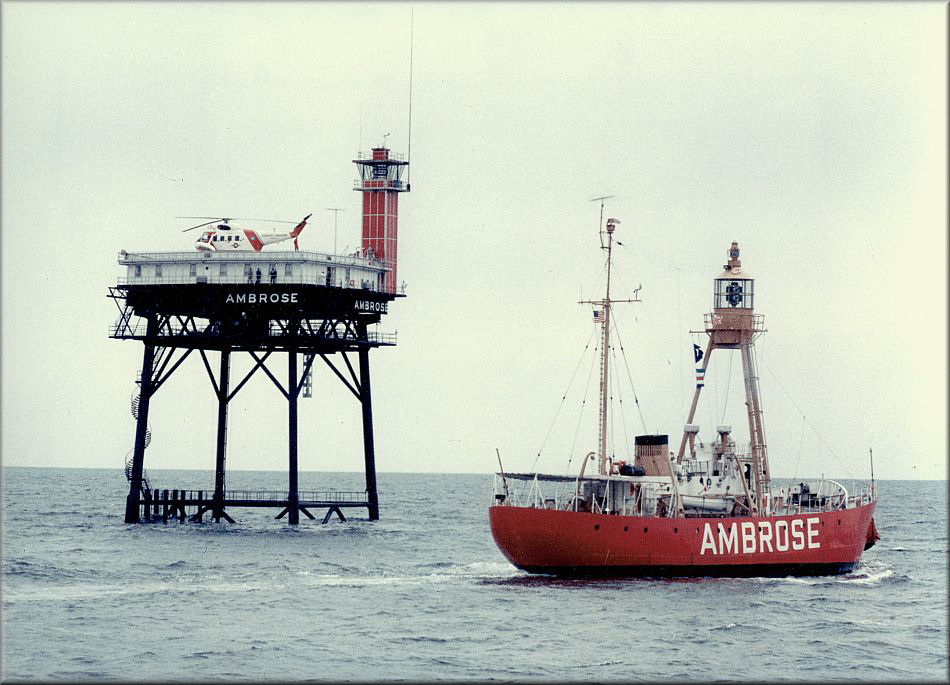 Deployed this past Friday to replace the Diamond Shoals Light Tower, the bright yellow buoy will provide weather data and will aid navigation.

Not far from the Diamond Shoals LightTower, a shiny, new, bright red buoy bobs in the Atlantic Ocean. Soon, to the particular relief of anglers and conservationists, a similar buoy will appear to the north, near the Frying Pan Light Tower.

The deployment this past Friday of the Diamond Shoals weather and navigation buoy, designated Station 40125, provides a symbol that months of lobbying worked. After several meetings between the U.S. Coast Guard and stakeholder groups, an agreement was reached. Anglers and forecasters will continue receiving navigation and weather data that had been scheduled to be discontinued this month, and the towers will become artificial reefs instead of going to a scrap yard when they are dismantled this summer.

"We will be deploying a three-meter discus weather buoy within one mile of Frying Pan Tower," Dave Gilhousen of the National Data Buoy Center said. "The earliest we can get it out is May. But we are coordinating with a Coast Guard vessel from which the buoy will be deployed to prevent any gap in the data."

The Frying Pan buoy, which will be designated Station 41013, should increase the accuracy of weather data as well, Gilhousen said. "While the tower equipment is currently looking good, the data from the buoy will be even better," Gilhousen said. "Wind, wave and water temperature data will be more accurate because the buoy is closer to the water surface than the tower's instruments. The Corps of Engineers is also funding equipment for directional wave measurements to help them with predicting shoreline erosion and protecting structures."

A coalition of marine interests also is lobbying Congress for additional funding for weather and navigation buoys.

"The National Data Buoy Center finally has a handle on it," said Ray Rothrock, Carolina Beach mayor and charter boat captain. "Some folks have different ideas on where weather buoys to replace the tower data should be placed. We feel that the Weather Service should determine where they should go. But I have never seen such difficulty in getting people that need to talk to each other talking to each other."

The dismantling of the Diamond Shoals tower caused little worry among mariners because its weather instruments stopped functioning, but Frying Pan was another story. That tower has aided navigators in southeastern North Carolina for 40 years, and anglers heading offshore receive National Weather Service broadcasts that report wind velocities and wave-height conditions detected by the tower's instruments. Anglers also use the tower as a point of reference, and they catch fish alongside the tower itself.

However, because corrosion of metal plates beneath the landing pad means helicopters no longer can land, the navigation beacon and weather instruments cannot be serviced, said project coordinator Darryl Moser, a civilian architect with Coast Guard Facilities Design and Construction. Although the beacon has not been operating for some time, the weather instruments still function, and the prospect of losing that data raised alarm among anglers and forecasters.

Charter boat captains need to know what is happening at Frying Pan before they head out. "Without the tower data, the Weather Service is really only guessing," Rothrock said.  If the tower's instruments were not replaced, the Weather Service would have had to obtain data from two distant buoys, one located 150 miles north and the other 175 miles south.

"There is nothing like knowing what's going on so we can calibrate our instruments based on what is really happening," said Tom Matheson, a warning-coordination meteorologist with the Wilmington office of the Weather Service. "Without the data, we will be hard-pressed to see how our models are performing.  "We are getting calls from angry fishermen. Artificial reefs are wonderful things, but you have to know what you are dealing with before you head out there to go fishing."

When the Frying Pan tower is torn down, the wreckage will be turned into an artificial reef, as will the Diamond Shoals wreckage. The project is the result of efforts led by the Long Bay Artificial Reef Association, which helps the N.C. Division of Marine Fisheries with enhancing and maintaining seven of its artificial reefs along the state's southeastern coast.

"The Coast Guard was going to place a navigation buoy approximately 1,000 feet to the south," said Bob Black, a member of the reef group. "But they were planning on taking the tower to the scrap yard. So we went to the N.C. Division of Marine Fisheries to be sure we had local support. Then we went to the Coast Guard to ask them if they could make it into an artificial reef."

"For Frying Pan tower, the preferred option is using it to establish an artificial reef," Francesconi said. "While you could apply for a reef permit to cover the entire area, it is better to identify and avoid areas of live bottom. The tower is sitting on live bottom, so it will have to be moved to another location. But, ideally, the material would be placed nearby."

Marine Fisheries personnel are using side-scanning sonar and underwater cameras to find acceptable areas. Once the best location is found, Francesconi will issue the permit for the reef.  Placing a dismantled tower nearby instead of hauling it to shore should save time and money.  "Equipment and mobilization costs are between $50,000 and $100,000 per day for a project of this type," Moser said. "There could be substantial cost savings in using the tower to create a reef."

Petty Officer Krystyna Hannum of the U.S. Coast Guard Office of Public Affairs said using the tower material for a reef "will provide benefits for everyone."  "The towers were coming down anyway. Using them to create artificial reefs promotes marine life, gives anglers a place to fish and divers a place to go," she said.  And now that the towers' instruments will be replaced by weather and navigation buoys, anglers, divers and other mariners will know what conditions await them when they get there.